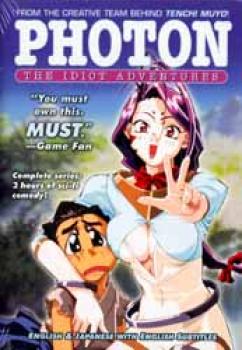 From the creative team behind Tenchi Muyo!

A saga begins... Photon, a young man with a kind heart and superhuman strength, leaves his village on Sandy Planet (a desert world) in search of a runaway friend. During his heroic quest, he is accidentally engaged to a renegade space pilot! Now they're on the run from the evil emperor of the galaxy and his bumbling henchmen. But even worse than the bumbling bad guys are the disastrous cooking contests, exploding spas, and cheerleading aliens! 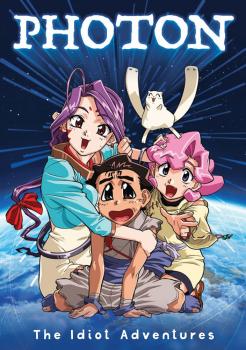 Photon - The Idiot Adventures is a real must-have if you like stupid (in the positive sense) anime. The story is hilarious and I at times nearly peed my pants of laughter!

These 6 episodes (which is the whole series) is &quot;action&quot; packed and full of idiot situations!
Notice the display (or the lack of it.....) of the private parts of the villian. At one time blotted with a big black spot which moves up and down. In another episode the villian is hit through a wall, leaving a silouette of him (and his private part), or totally wrapped up in bandage. The other jokes are all in the same line as the before mentioned examples!

So yes, this absolutly is a must-have! It seems you can't get it more idiotic then this!