Other items in Abenobashi TV DVD US

Crazier than crack, madder than a March hare!

Her it is - the weirder, wackier second volume of Magical Shopping Arcade Abenobashi! Suffice it to say that Arumi and Sasshi still haven't convinced that pesky goblin to send them back to the sanity of the real world. From dinosaurs to detectives, cavemen to crime bosses, each jump the pair makes takes them to another fantastic world that's even more frenetic than the last!

Get ready for more action, antics, adventure - and a trip to the past that gives us a glimpse of a puerile punk named Masa (yes, that Masa)! The two kids from Osaka will square off against meteors, magicians, and the mob! You'll laugh. You'll laugh again. You might even get grossed out. (But hey, at least you won't cry.) It's all waiting for you in the second off-the-wall volume of Magical Shopping Arcade Abenobashi! 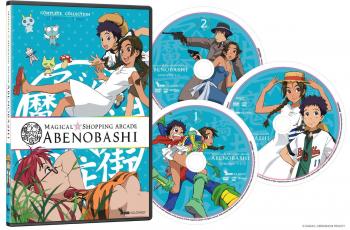