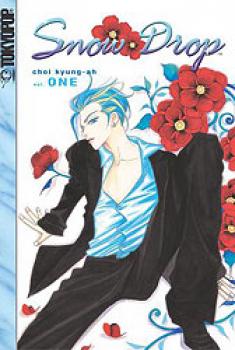 A Romeo and Juliet-style Romance.

The Snow Drop nursery is So-Na's safe haven, but when the young girl's father forces her to enroll in a new high school, she is reminded that life in the outside world is no Garden of Eden. Luckily for her, her bad-boy friend, Ha'Da will be there to keep her company. But when So-Na sets eyes on the hunky Hae-Gi, her world gets turned upside down. As beautiful as he is moody, Hae-Gi might either be the blossom of love in So-Na's lonely life...or the thorn in her side.

I started reading this manga, hating Hae-Gi, because he acted like a jerk, but then came the school party and the swap game *everybody had to get 3 posessions and someone else had to guess what his most valuable possesion was. They had to hand the objects back after the dance, this way So-Na tricked Hae-Gi to go to the school party* I began to sympathize. He had such a sad story about the marble (which was his most prized posession). And then I had to laugh at the part where everyone thought that Hae-Gi's little brother was his girlfriend *everybody thinks his little bro has killer legs* and then Ha'Da goes running after Hae-Gi's little brother!!! OMG, I wonder how he will react when he finds out that his so called love turns out to be a boy :P