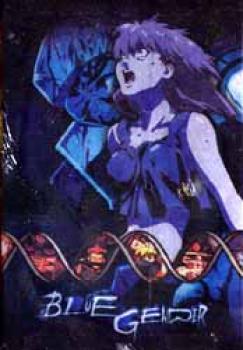 Welcome to the year 2031. Bugs known as "Blue" have inherited the earth, casting humanity to the brink of extinction. Faced with this unstoppable threat, the last vestiges of humanity have abandoned earth and pioneered to the stars, where they train for their inevitable return to earth. To these hardened warriors, Yuji, a 'sleeper', is nothing more than a sample of life before the Blue, mere cargo. And Yuji realizes that if he wants to survive and reclaim some part of the world he once knew, he has to fight for it! Contains Blue Gender DVDs 1-8 in a Collector's Art Box!

"An Very Exciting Serie with a lot of action and good storyline" by shino (Netherlands) on Oct 7, 2004

Great story about a little problem that became a disaster, i really love the characters and the mech's used in this serie look really cool.
Id really recommend it!

This box contains all episodes of one of the best mecha-stories i have seen so far. Yuji, the main character, is followed through the hardships of waking up in an entire different world then the one from his memories. Not only did the blue change the face of the earth, but humanity also changed their view of morale. Struggling between his old memories and new reality, yuji will have to find his way in this new life.

It's a mecha-anime with an awesome story. If you like anime's as Gasaraki and Evangalion, you will love this one.

I would like to give it 5 stars, but the dvd boxes tend to have problems with holding the disks when they are shaken a bit, so a few disks may have a (very) little scratch or two (nothing to wory about).