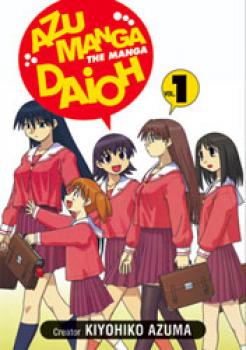 Other items in Azumanga daioh manga US

Azumanga Daioh is one of those mangas that nearly everyone can read and enjoy. The cast of characters is great and all of them are pretty plain and stereotypical, but that's exactly what makes them funny.

With Tomo, the hyper-active, the cool Sakakil, smart Chiyo, air headed Osaka and more there will be a lot of hillarious moments. Though devoid of a plot, the time does pass by as they breeze through the annual sports contest, summer vacation and winter until they graduate.

I usually write looong reviews, but this is a comic book that should speak for itself. If you never tried, what are you waiting for?

Azumanga daioh is one of those manga/anime titles I've bought mainly because I've heard so much good about them. And this one is worth every penny. In vol. 1 most of the main cast is introduced and their characters are mostly portrayed in their debute strip. But it takes some time to know them better, especially Osaka.

The strip format works surprisingly well, it allows you read the entire book in one sit or you can read it a few strips at a time. The stories offer something for everyone, ranging from warmhearted to slapstick humour with sometimes slightly darker tone. It's life, but in Azumanga, it's never dull. Except sometimes for the characters. ^_^

Recommended for everyone. At least give it a try!

Azumanga Daioh contains short stories about everyday life. Mostly background for stories is school, where friendship and funny things meet. What i like in this manga is that those stories are really easy to read anywhere if you want to kill some time, you could even put this stories on newspaper, would fit well.

How could I not give this serie a 5! It's so funny! As You can read in the other reviews it's more of a short strip manga which makes it great to just pick up and read when you don't have anything to do. And ADV's done a great job with the translation. In the end you can read a discription of some of the jokes and it also gives a great look in to the japanese customes.

Probably the only "strip comic manga" approach Japan has (so far) introduced to the rest of the world, and it works like a charm! The "story" of the everyday life of a bunch of high school girls is nothing more than that, yet funnier and more obscure (in a good way) than anyone could imagine!

As said by others, mini-stories of just four panels each. Read 'em, think 'em, and most often laugh out loud very soon after :D Works great as manga and even better as anime, so anyone even relatively seasoned with anime/manga is strongly encouraged to give this a go!

...and once done, move on to Yotsuba&! as it's from the same author and just as great as Azumanga Daioh! ^^;

Great manga, also nice that it's different from anything I've read before. The short stories are a lot of fun, it makes it easy to read, and the 'clue' of them always has to be expressed within those 4 boxes, which basically means that after every 4 boxes you will have laughed yourself to death. XD
Very funny, very cute.

Azumanga daioh endearing, heartthrobbing, tear jerking and overall too much fun not to read.
Tomo, Osaka, Chiyo and the rest make a more than loveable bunch. If Tomo's selfconfendence doesn't lift your spirit nothing will. One of the best story's in this book are the four consecutive once about Osaka and Chiyo having a summerjob. You feel for the people on the other side of the counter especially there (cat loving goldenheart-rockexterior) class-mate. Plus this book makes one thing clear when on holiday never let your corky teacher drive.

I bought my first Azumanga Daioh tankouban/s like, "Oh well, I couldn't find anything else so I'll try this." I don't regret! And if you do that also, I'll bet you like it! (...But thanks to my friends of bying the first volume for me.) AD is now one of my favourite series. It's contains mainly four-frame strips, so this is kind of "what manga can also be"-series. And that's good. There's also some "special" (or "deluxe") stories, that are drawn like normal manga, not four-frame. And they're JUST as good.
Even though it doesn't always make you laugh, it's fun. At least you smile after/when reading. AD made me very happy, and I started acting kinda hyper after reading some of the books... xD
At first, I had problems remembering the names of the characters, there are so many of them. I love the characters, and now I even remember their names... ^^

I love Azumanga Daioh!
Sometimes it's a bit weird, but that makes it even more fun XD
If you're looking for a manga that'll make you laugh, then Azumanga is a really good one to get! :P

If you're are looking for a deep touching story this is not the way to go, but if you're looking for a real good laugh this is exactly what you are looking for. Each character has it's own special personality, that sticks with you, especially their home-room teacher is hilarious. Even though they're all short 4-panel strips you probably won't be able to stop reading in the middle!

The concept of this series is simply genius. It follows the lives of around six high school girls (more if you include side-characters), and three teachers through three years of school. The layout of the manga is also unique- it's presented in sets of 4-panel comic strips, each comic strip funny in itself, while still moving the overall story along.

As expected, each character has a very unique personality..
Chiyo is a ten year old (!) genius, who skipped earlier years and went to high school.
Sakaki is quiet, unexpressive and introversial, but adores cute things.
Yomi is the most normal of the group, but can be loud and obsessed with her weight after a a while.
Tomo is an incredibly energetic student always looking for a challenge.
'Osaka' spends most of her time daydreaming and wondering about very odd things.
Kagura is excellent at sports, but can get upset easily.

There are also the three teachers- Yukari (the homeroom and foreign languages teacher), Nyamo (the gym teacher and teacher of another class), and Kimura (a very, very strange History teacher, and the only male main character)

As I'm sure you can tell, everybody reacts differently during the different periods of the school year, the manga covering entire sections devoted to things such as sports days, exam seasons, and field trips.


As far as the translation goes, a few things have been changed to work with the English language such as puns, tongue-twisters, and inside-jokes that only the Japanese culture will understand. This actually impressed me as I wondered how they were going to deal with translating a joke about a Japanese TV show that nobody speaking English would understand, but they managed to change the joke entirely and still keep it as amusing.

Overall, you can't miss out on this series, it's truly worth getting!