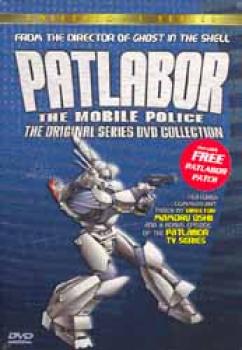 Meet Noa Izumi, cute and spunky, she could be the girl next door...except that she loves giant robots with a passion that's a little scary. Today's her big day, her chance to pilot a giant robot of her very own! Meet Alphonse. He's a giant robot. Meet the Patlabor police squad, a pack of loveable loose cannons with short fuses and really big guns. They fight crime. Watch as they come together for the very fist time in the groundbreaking series by Mamoru Oshii that introduced the beloved Patlabor universe and made animation history! Complete series: Episodes 1-7.

I went about the Patlabor anime all ack-basswards. What with the property's somewhat spotty release history in Europe, I started out with the movies, then imported the whole TV series and New Files OAV's. It's only now that I got around to watching the original OAV's. Every incarnation of Patlabor I had seen so far had been pretty much excellent, so I expected a lot from the much-touted original OAV's. And while they were far from disappointing, there are definitely better incarnations of Patlabor to choose from.

Visually, these OAV's haven't aged very well. The art has a very old-school look to it, and the animation frequently hits choppy waters. Early OAV's usually stand out with their polished looks, but apart from some impressively intricate mecha, Patlabor offers little in the eye candy department. The characters also suffer from pretty hurried introductions. With only seven episodes, there isn't a lot of time to properly flesh them out, so few of them ever develop any further than their signature running gag (Ota is a gun maniac, Shinshi frets about his wife, etcetera). Most frustratingly, Patlabor's rich, very believeable near-future setting doesn't nearly get the time and attention it needs to really shine. The fascinating world of Patlabor was established far better and in more detail in both the TV series and the movies.

If you're already a seasoned Patlabor fan, the original series is worth adding to your collection just to see where it all started. Several episodes of this series introduced concepts that would inspire important later parts of the Patlabor canon. For example, episodes six and seven clearly foreshadow the plot and grim atmosphere of the seminal second movie, and episode three provides the template for all those monsters-in-the-water and big animal incidents from the TV series and from the third movie (and it provides a hilarious spoof of the 1954 black-and-white Godzilla, too). It's definitely interesting for a Patlabor completist, but said completist will probably also have seen the same things done much better in other, more recent parts of the Paltabor canon. If you're new to all things Patlabor, I recommend you try a boxed set of TV series episodes first. You'll get much more episodes for roughly the same price (or less - the original series is distinctly pricey at some retailers), and they're a good deal slicker to boot. The new series is a good find for Patlabor completists, but not as highly recommended as the TV series and movies.