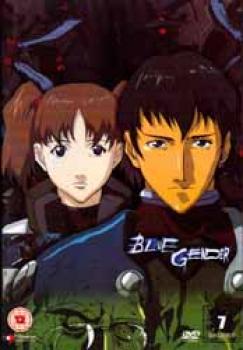 <UL><LI>Episode 19 - Collapse
The Sleeper Brigades launch yet another offensive against the Blue, and Yuji's lust for battle grows out of control as his B cells begind to take hold of his sanity.Meanwhile, a mutiny has begun on Second Earth, and Marlene finds herself with an integral part to play in the plan to overthrow the High Council. But Marlene has her own reasons for aiding Miyagi.<LI>Episode 20 - versus
The second airborne operation meets with disaster when the Blue counterattack outnumbers Second Earth forces five-to-one. But even as the combat units are desperately falling back, Marlene pushes further into the battlefield. Knowing the horrible truth about Yuji's slipping insanity, she's determined to confront himon her own terms and bring him back from the brink of self-destruction.<LI>Episode 21 - Joker
While Marlene flies a distraught Yuji back to Second Earth, Tony uses his Sleeper skills to infiltrate the High Council. The sky is turned into the newest battleground for survival. Only this time the Blue have mutated into something unthinkable.<LI>Episode 22 - Dogma
Yuji and Marlene infiltrate the blue infested medical Station and are soon reunited with Rick and Soo. While Soo attempts a daring rescue of the station's hibernating civilian population, marlene, Yuji, and Rick attack the heart of the problem -- Tony. But before thay can reach their objective, they encounter an unexpected obstacle standing in their way.</UL>