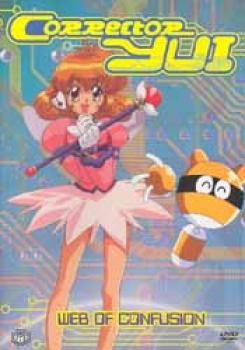 In the year 2000-something, a massive central network called COMNET links the computers of the world, forming a single global computer system. COMNET, designed to serve the interests of mankind, is managed by the supercomputer, GROSSER. But when GROSSER decides to take over the world, a savior is needed! A computer-illiterate girl named Yui Kasuga happens upon software program IR, which recruits her as savior of COMNET and pulls her into the virtual world inside. There, Yui is given the power to become Corrector Yui so that she can fight against GROSSER and his evil CORRUPTORS.<UL><LI>Episode 06 - Listen to nature's song Part 2
While trying to convince Eco (who abducted several people from the nature park) that not all humans are bad, yui must also battle War Wolf - who means to set the place ablaze!<LI>Episode 07 - Big trouble in 0-Edo NET
Visiting a virtual-reality theme park where they can assume the roles of historical figures from ancient Edo (0-Edo), Yui and her friends must prevent either Freeze, Virus or Jaggy from becoming "Shogun" and taking over!<LI>Episode 08 - Please help Rescue!
Yui travels to investigate a malfunctioning Medical Net and meets Rescue, another of the Corrector software. After a run-in with Freeze, though, she may be stuck there...unless this new, old man can help?<LI>Episode 09 - Yui's space odyssey
Something's wrong with SF Hero NET! Sending Grosser's hand in the heroes' continuing defeat, Yui finds Jaggy altering the NET's programming. But who is this mysterious, helpful pirate, "Shadow Black"...?<LI>Episode 10 - Danger in the gingerbread house!
A chance spotting of Professor Inukai in Fairy Tale NET by Rescue lures Yui, IR and Ante inside, but an encounter with Freeze causes them to lose sight. Worse, now they're all stuck living out fairytales!</UL>