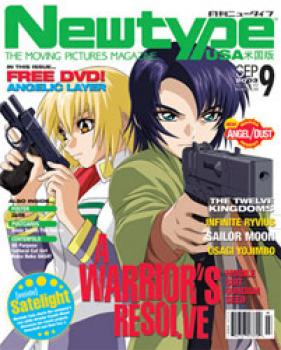 This magazine is an absolutely must for every anime-freak! You'll get good information, and the pictures are very nice, every time again and again

Well, most people already know Newtype, and the ones who don't...buy and issue :)
The september edition contains all sorts of info on anime and manga. The Angel Dust manga insert is really cool and as all of the manga inserts too short. You'll also find some great info and pictures on X -1999-, Mobile suit Gundam Seed, the twelve kindoms and other stuff. The ninja scroll postcards are a must have for fans and great cards for anime fans in general. To condlude this all there's a great dvd with the first episode of Angelic Layer and a awson Zaion poster.
I love the whole magazine and especially this English september edition is an asset to your collection of magazines / your whole manga and anime collection :)
Greetings,
Koneko