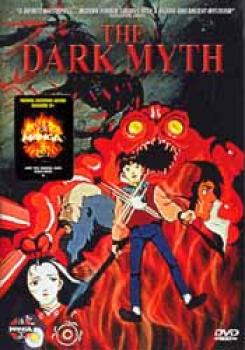 Before the age of man, warring gods of ancient legend shook the Earth to its foundations with their might. Now these prehistoric rivals from Japan's past are fighting to preserve their secrets in the present day.

Cast from the High Celestial Plane to the shadows of the underworld, the chaotic God of Darkness, Susanoh-oh, lies sleeping. Now is the time of his rebirth. But the harbingers of his coming have not gone unnoticed.

Agents of the Kikuchi clan - direct descendants of Japan's first inhabitants - have witnessed the warning signs of the swelling darkness and hurriedly prepare to face it. Armed only with arcane knowledge and a handful of occult artifacts, the team of investigators must combat the assembled spirits of hell to find one young boy chosen by fate to grapple with the destructive might of the deadly gods.

Surreal, chilling, intelligent and complex, THE DARK MYTH is a two-part tale of forbidding prophecy and fear, weaving the mythology of ancient Japan into a web of modern horror. Music by Kenji Kawai (Ghost in the shell).