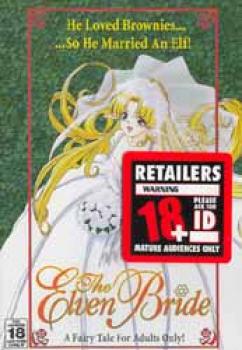 Mixed marriages are a tricky thing, so when Kenji, a human, and Milfa, an elf, get married, the course of true love does not run smoothly... especially when it turns out that there's a certain difference in plumbing that makes it almost impossible for them to consummate their marriage! First, bold Kenji sets forth on a quest, seeking the ultimate marital aid, one which can be found only in the land of the manhungry harpies. But how will poor Milfa fare, left to wait in a hostile village full of prejudiced humans and vicious elf abuse? Then, after her husband trots off on his daily journey, Milfa sets off on a quest of her own!Unfortunately, the only doctor in the entire kingdom who specializes in Milfa's problem is more than just lecherous...he's an incubus! Toss in a rampaging double-headed dragon running amuck, and you have a hilarious swords and sorcery misadventure that explains exactly why young lovers shouldn't marry on impulse...especially not when one of them's an imp herself! Contains both elven bride 1 and 2!