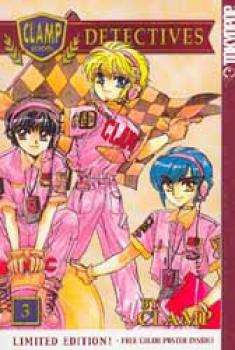 It's tough being Nokoru Imonoyama, the smartest kid at a school for geniuses. There's not a lot that can stimulate his mind. So what does he do? Start a detective agency to help damsels in distress! nokoru's partners are his two best friends and fellow class board members: Souh Takamura, a master of martial arts, and Akira Ijyuin, detective by day, thief by night. And when Nokoru isn't trying to replace himself with a robot to get out of his paperwork, he's searching for the owner of a lost silk stocking (obviously a damsel of the highest class), investigating an elaborate surveillance system, and recalling the time he made his first real friend during a daring kidnapping escape.

Clamp School Detectives is about a trio of insanely wealthy, insanely talented young boys who form a detective agency in their insanely huge, insanely high-tech school. Only in their world, a detective's job is not to foil crimes or to unmask murderers, but instead to help some girl find her lost trinket. The 'cases' these boys have to solve rarely get more involving than finding a lost pet for a pretty girl who's on the verge of a sobbing fit. And whenever something mildly threatening does happen, a solution either conveniently presents itself, or the boys suddenly display superhuman athletic skills that get them out of trouble without even breaking a sweat.
This manga clearly isn't about suspense, though one wonders what it is trying to achieve instead. My guess is this is supposed to be a comedy, albeit not a very successful one. The jokes are tepid and repetitive. Each story takes ages to build up to a supposedly hilarious pay-off, but it never feels quite satisfying. The stories in this third volume are especially tedious bits of fluff where nothing really happens when all the comical histrionics are over and done with. Thrill as the boys wonder to whom a lost silk stocking might belong until the owner simply walks in! Gasp as a whole chapter is spent running to and fro in search of the Nokoru character, only to reveal he's been asleep under his desk all along! Maybe, just maybe some very dim-witted young girls with a passion for cutesy stuff might find this funny. Everyone over ten years old needn't bother. Nothing happens in this book that's remotely gripping or amusing. I also really hated the translation's attempts to sound all hip and happening, and its annoying use of Japanese suffixes (Nokoru-sempai, Suoh-san, etc) in English dialogue. It's bad enough when the characters seem to communicate only by spouting exposition.
The art is at least reasonably pretty, with lots of those big eyes and elaborate frocks that CLAMP used to do so well (until they started to churn out hideously stylised art with jaggy edges a la Tsubasa Reservoir Chronicle). I reckon there's a hard core of cutesy fanatics who'll be won over by the art alone, but even they can safely pass this up without missing out on anything. This manga may be covered in the artistic equivalent of pink sugar frosting, but inside it's completely hollow.