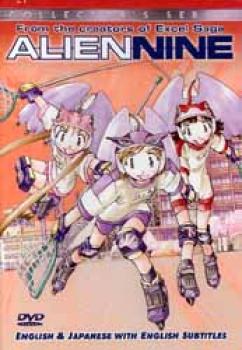 From the screenwriter of Millenium Actress, Cowboy bebop and Bubblegum crisis and the producer of Tenchi Muyo!

Yuri is totally bummed. She just started 6th grade and has been elected to capture and eliminate the aliens that are constantly invading the school... a difficult and dangerous job! Even worse, she has to wear a creepy symbiotic alien helmet to get the job done...GROSS!

With Alien 9's cute, colourful box art and extremely cartoony character designs, you might think this is some kind of fluffy action comedy. Nothing could be further from the truth. Underneath its cheerful exterior, Alien 9 is one ugly beast of a story. It's bizarre, disquieting and nightmarishly violent. And, I might add, quite brilliant too.

The story centers on three grade school age girls who've just been picked for their school's anti-alien brigade. Creepy-crawly aliens regularly attack the school, and these mere children are sent out to confront the invaders and preferably capture them alive. The girls are armed with rollerblades, butterfly nets and the Borg - wierd frog-like creatures that sit atop their heads and can spew a barrage of flesh-piercing needles. All of this may sound innocently goofy, but it's not. There's never any doubt that the girls are in genuine danger during their sorties, and they know it. Especially the series' protagonist, Yuri Otani. She's a pretty whiny, downcast girl to begin with, but she's positively terrified by her encounters with the aliens and often can't do more than just break down and cry. It's hard to blame her. The aliens are revolting and distinctly menacing creatures, and battling them ususally ends in a gory, goopy mess.

Quite where the aliens are coming from and why average children are sent out to face them is never really answered. We only get some small hints at a disturbing bigger picture behind the series' events. Nevertheless, Alien 9 manages to deliver a well developed story in a mere four episodes. We get a good, unflinchingly brutal look at the girls' personalities and the kind of mental scarring they suffer throughout the series. The series sports some very fluid, lively animation. It's a good-looking affair once you get used to the odd character designs. And I did finf the insanely cartoony designs hard to get used to. Characters have hardly any facial features to speak of. Faces are drawn as little more than rounded blobs with big eyes in them. It's a very wierd contrast to the relentless violence and mental anguish that goes on in the series. By the last episode, I had pretty much grown to like the chubby, featureless characters, but by then everything was already heading towards a bitterly tragic, brutal ending. It's been a great series the first time through, and there's plenty to re-watch and experience anew. Just be aware that you're in for a highly unusual series full of violence, slimy monsters, disturbing imagery and downright cruel emotional wrenching. It's definitely noy kids stuff. This will leave a lasting impression on you.