You are under arrest TV vol 05 DVD 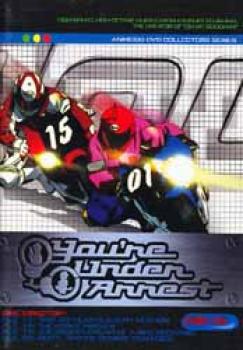 You are under arrest TV vol 05 DVD

<UL><LI>File 17 - That 20-year-old is my mother!
Is that Ken's new girlfriend? No, that's his dad's bride-to-be and there's one hitch to their getting hitched. Ken has to call this young woman...mom!<LI>File 18 - The strike brigade
People are getting punished Strike-Man-style, but he isn't doing it. Who are the girls behind it all and what pushed them over the edge?<LI>File 19 - The broken dream of a bike mechanic
Natsumi's motorcycle breaks down and the mechanic makes her repair it herself even though he's better at tuning up bikes than Miyuki. Who is he and what's the history between him and Daimaru?<LI>File 20 - Fight! Traffic combat team OB3
It's traffic Safety Week and Bokuto Station's theatrical debut. Ken is seduced by the forces of evil and must try to defeat the girls when the stage-play turns real.</UL>