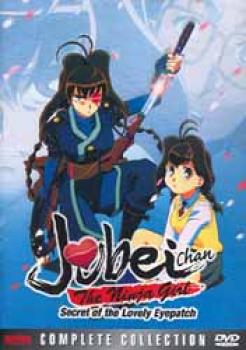 And you thought history was boring!

Jiyu Nanohana has a lot of problems. She lives with her dad, a writer who's always working too hard. Her mom died when Jiyu was very young. And now, she and her dad have just moved. She's ready for her first day at her new school, but she's not ready for what happens to her.
When a creepy guy approaches and begs her to take his gift, the "lovely eyepatch," Jiyu brushes him off as a random weirdo. But when given no other choice, she reluctantly puts it on. When she does, she becomes the reincarnation of legendary hero Yagyu Jubei, Japan's greatest warrior. The creepy guy, Koinosuke, is Yagyu Jubei's 300-year-old apprentice, and he swears himself to Jiyu's side.
Now, as the reincarnation of Japan's greatest hero, Jiyu finds her life is a lot more complicated! She must defeat the evil plans of Jubei's worst enemies, the Ryujoji clan. As she comes to slowly accept her new identity, she will face off with various warriors disguised as schoolteachers, battle an entire ninja army, learn the secret of her powers, and try to survive Koinosuke's training!
Sounds like a tall order? You don't know the half of it. A madcap comedy by Madhouse studios and directed by Akitaroh Daichi, jiyu's asventures willl have you in stitches (the good kind)!<UL><LI>Episode 01 - The birth of Yagyu Jubei II<LI>Episode 02 - Falling in love with the enemy<LI>Episode 03 - Men's hearts were swaying<LI>Episode 04 - The road of no return<LI>Episode 05 - The enemy brought a memory with them<LI>Episode 06 - My next enemy is yesterday's ally<LI>Episode 07 - She had grasped the secret before she knew it!<LI>Episode 08 - I attached this thing to my head<LI>Episode 09 - Dad's premonition of love<LI>Episode 10 - This is where to make an effort<LI>Episode 11 - But the path curves ahead<LI>Episode 12 - I had met a daughter I had never known<LI>Episode 13 - Night gave way to a brand new day</UL> 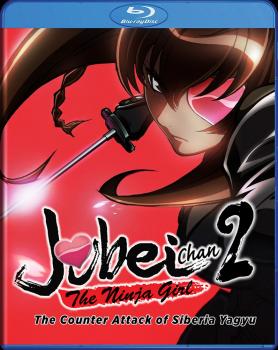