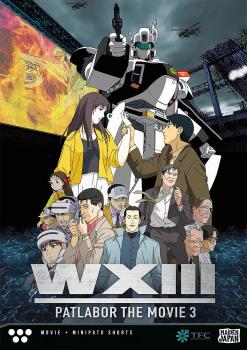 The SV2's giant Ingram Patrol Labors may be the ultimate in crime-fighting technology, but there are never enough to tackle every pending case. So when a mysterious series of deadly attacks targets Labor operators across Tokyo's harbor region, the job goes to ''conventional'' detectives Hata and Kusumi. After all, just because it looks like a giant robot created crime doesn't mean that it is a giant robot-created crime, and deep inside a web of half-truths and government cover-ups, the detectives uncover a secret biological weapons project called WWXIII. But while this secret may have been buried, it's still very much alive. And that's when having the armored force of the SV2 as backup may become a literal lifesaver for the entire city in WWXIII - PATLABOR THE MOVIE 3! As a special bonus, this deluxe edition of the final animated feature in the Patlabor franchise also includes the acclaimed MINIPATO CG animated shorts.