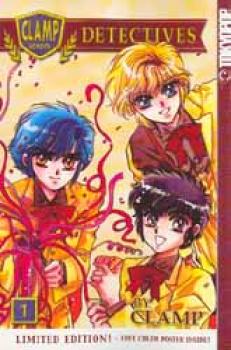 Welcome to the CLAMP School, Japan's most prestigious place of learning - home to prodigies, wunderkinds and young geniuses of every make and model. In a world where the average student is smarter than the teachers, how can the top students challenge their intellects? Why, by creating a detective service, of course! Meet the CLAMP School detectives: Nokoru Imonoyama, the world's smartest kid, who can detects a woman in distress from two kilometers away; Suoh Takamura, a martial arts master who's cool as ice; Akira Ijyuin, detective by day, master thief by night. Wherever there's a young lady in distress, they'll be there. After all, when you're as smart as they are, you don't have to study.

CLAMP School Detectives is immensely silly fluff. That's not always a bad thing, just don't go in expecting a murder mystery just because there's the word 'detectives' in the title. This is no whodunit, things don't get any more serious than a quest to find a girl's missing pet peacock. And whatever sleuthing needs to be done is usually solved via one or two simple clues. And if all else fails, our protagonists' prodiguous talents and staggering wealth will easily solve any problem. I always find the abundance of incredible teenage prodigies one of the most annoying clichés in anime and manga. Apparently, every second anime character needs to be a world champion athlete and company president at age fifteen. In CLAMP School Detectives, this cliché is taken so far over the top that it becomes one of the comic's main sources of laughs. The story's tone is light and silly, and it never pretends to be more than just fluffy fun. The art is pretty, the boys constantly don cute lil' uniforms and the English-language edition looks nice and solid. It's eye candy done right, and very little else. Young readers, or those in a highly silly mood should enjoy this.