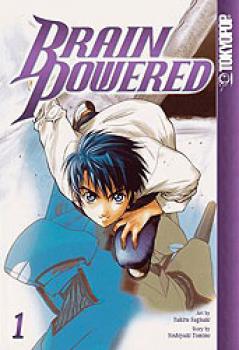 Other items in Brain powered manga US

The future... Mankind has depleted the Earth's resources. Now unexplained earthquakes, volcanoes and tidal waves wreak havoc on the planet. In the wake of this destruction, strange metal plates erupt from the Earth's crust. From these large disks emerge organic machines called Antibodies.

Yuu Isami pilots and Antibody called a Grand Cher. Hime Utsumiya is the unlikely pilot of an Antibody called a Brain Powered. Yuu works for Orphan, a mysterious and sinister group of scientists who dwell in an ancient alien vessel that lies at the bottom of the sea. Hime's not a big fan of Orphan. When the two cross paths, their fates are bound to change... but so will that of the entire world.

Beautifully drawn manga with a good story, although i found it hard to follow the first time i read it, since it isnt really clear which text balloon is linked to which character, especially when they shout, which they do alot.

The story's about biomechanical mecha born from plates which erupt from the earth ever since mankind used up all of Earth's resources. Hime Utsumiya becomes the pilot of one of the types of 'Antibodies', as the mecha are called, a Brain Powered, and fights against Orphan, while Yuu Isami fights for Orphan.