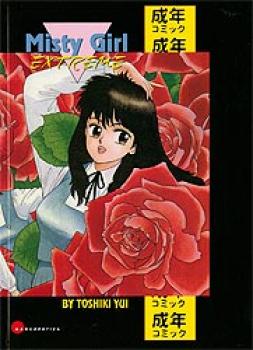 Step into the fantasy world of Toshiki Yui's Misty Girl. The creator of the Japanese manga classic Hot tails thrusts us into a world of sexual fantasy, with each story centered around a strong woman character who has to overcome powerful sexual ordeals. A sample of what to expect inside:<UL><LI>Three school girls fall into a romantic tryst...taking the virginity of one of them, while one of the others is carrying a special surprise in her panties...!<LI>In Jipang, a world where giant turnips float in the air, a woman tries to pick her friend up at the airport, only to be sexually mauled by a robot cop.<LI>In an attempt to soothe her raging lust, a woman summons a demon from hell to have sex with. After an orgy of sexual delights she finds out that even a demon from Hell is not enough to satisfy her.</UL>...and that is only a sample of then wild and wooly stories you'll find witin! If you like X-rated manga, then don't miss out on the world of Misty Girl Extreme.