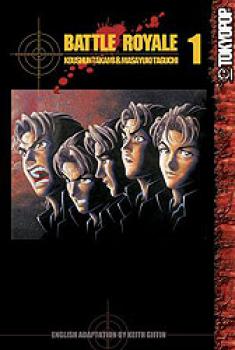 Other items in Battle royale manga US

It's a lottery. But in this lottery, there's no multimillion-dollar check to turn your life around. No, this is the worst thing that could happen to you if you're a ninth grader in the economically and sociologically bankrupt future that creators Koushun Takami and Masayuki Taguchi have dreamed up. Their controversial series about "The Program" - a game that picks random classes and puts them on an abandoned island for a televised fight to the death - has drawn an incredible following in japan. Is America ready for it? Are you ready for it? Tokyopop brings you this groundbreaking series featuring an English adaption by renowned writer Keith Giffen. Put aside your morals, hold on to your seats and prepare yourself for an unforgettable manga experience... prepare yourself for BATTLE ROYALE! 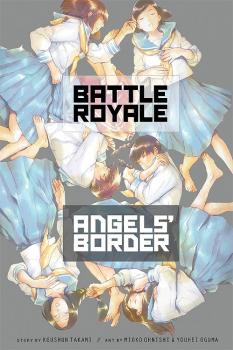 This manga was nothing but a disappointment when it comes to me. I watched the movie and absolutely loved it, but manga had hardly any good points of the movie. The drawing style is awful and plot forced. All the boys in the story are some kind of pervs, and all the girls exist only because of that reason.
The movie and the novel are much more better than the manga.

This one is one of best series i've ever read.. Awesome thriller.. - could you kill your best friend/classmate? This story follows one class, who "winned" the "lottery" to The Program - they must play, and rules are simple - Kill each other, only the strongest survive. This manga is about psychic of heroes - what to do in this kind of situation? Hide and wait, or kill your friends? Every way is terrible, but from this Program is only one escape - to win..

"An excellent manga, way better than the movie" by little princess (Nederland) on May 11, 2005

Battle royale, after seeing the movie, I just had to read the manga. The movie was violent, the manga is even more.

This first part of the battle royale manga series starts off a bit slow, it shows some backgrounds of some characters and it takes a while to get to the part where the chosen slass arrives at the island, but from there on it only gets better. Flashbacks are used to make you get to know the students, perhaps in hopes of you feeling sympathy for them and that makes it all the harder to deal with if those characters get killed.

42 teenagers, all on the island, waiting to be killed until one survives. 42 lives, 42 backgrounds, 42 different minds. Who can deal with this kind of ultimatum and who will go insane immediately? What would you do if you had to kill all your friends in order to survive? It is a manga that, for me, raised that question and I don't even want to think of what would happen were this for real. It's a strange story, but certainly a good one and I for one am looking forward to reading more.

The manga is awesome compared to any other (if you like violence). You get to know the characters way more than you do in the movie. I really recommend this one to any thriller fan out there!

After I saw the movie I heard of this manga and I just had to buy it.
This is one of my favorite manga's! It's so good that you just have to keep reading it.
This manga has great violent battles and this is the reason why this manga is not for the younger one's. This manga has a great story and great quality so if you want to buy a good manga you should really buy this one.

Battle Royale gives a new series. Especially here in Germany you don't find anything that is smiliar to this awesome series. Okay, the style it is drawn is not usual. It is not typical for a manga (no big eyes, no crazy hairstyles and so on), but you get used to it.
The story is interesting. I have never read something that is smiliar to the story. The inner conflicts some students have is very interesting. Also Kawada is a good factor - a student who already survived one &quot;Game&quot;.
The studetens are all acting different. Kazuo kills everyone, Shinji tries to blow the people behind the game away and Shuuya trusts his friends. They all act different and that makes the story very good.

Although I have not seen the movie, I am sure the manga is equal or even better in the quality.
What should be mentioned is the violence: Battle Royale shows violence in almost every detail (like &quot;Battle Angel Alita&quot; for example) and so it's maybe not for younger readers. Though the younger ones wouldn't understand why some of the students don't want to kill/some of the students just CAN'T kill, I think.

All in all a good manga. If you like action, thrill and have nothing against extreme violence you can buy this manga without regards.

"everything you'd expect and more" by Adrian Logiantara (Netherlands) on Nov 24, 2003

Battle Royale is one of the best movies I've ever seen, so I couldn't help pick up the Manga.
And it's everything you'd expect and more. While the movie pretty much stays focused on the main characters, the manga takes the time to tell the story of the other students as wel as further exploring the main characters.

If you love the movie, but just want more, the manga delivers.

Battle Royale has gone through many forms of media- the book that started it all, then the movie remake, and now the manga series. All of which, I might add, are great in their own ways. If you've ever read the book or seen the movie, you're sure to love this, as although it has the same basic story, all of the characters have been remade into a much more manga-esque style, with martial arts experts, rock stars, and shy girls (plus, some very not-so-shy girls..)

For the people new to Battle Royale, here's a brief plot summary: in Japan, the government has banned many things such as rock music, and anything else that suggests individual thought. They have also passed a 'BR Act', where several times each year, a random class is chosen from a random school, put in some kind of large abandoned setting (a previous Battle Royale was set on a mountain), and told to.. well.. kill each other off. Only one person can survive, and if they don't kill enough in the time limit, or try to escape, they die too. This particular battle royale is set on an island.

Of course, it's all a little unfair, so they're 'helped out' by given a random weapon each, plus food and a map. There are also 'forbidden zones' that appear over time on the island. If they stay too long in one of those zones, the permanent collars they've all been fitted with, exlodes, killing them off, so they can't linger around one area for the whole 'game'.

The story focuses not just on people killing each other, but primarily the fact that they were all classmates before the game began. Some former-friends become enemies as they try to survive, some of the meaner looking students team up, some students suspect other people of wanting to kill, some want to help.. all in all, it's the worst possible scenario for all of the students, which makes the action very gripping as you never know whether the people who are friends would really manage to end up killing each other.

The only downside to the manga series in my personal opinion, is the artwork.. after reading the book and watching the movie, you have a mental image how everybody should look, and that's as real life characters. The 'teacher' in all three versions seem to be different, in the book he seems like a happy but sadistic bishounen type guy, in the movie he's the famous Takeshi Kitano, and in the manga he's... kind of.. scary. He's taken the 'always smiling' aspect of the book's character and multiplied it tenfold, and turned into a huge grinning exaggerated weirdo. Many other characters are similary exaggerated also, but with over 40 main characters, it's good to easily be able to distinguish who's who.

Overall, I strongly reccomend this book to more mature manga fans with a taste for violence and love, it's really quite a ride.