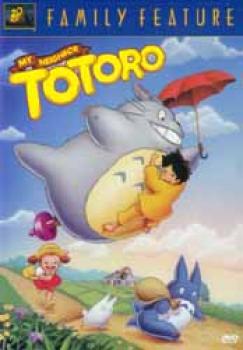 Enter a whimsical "garden of earthly delights", in this enchanting fantasy adventure that has become an international favorite of children around the world.

Deep inside a tree trunk, two children discover a fascinating new world inhabited by Totoros - amazing, charming creatures who become their friends. Some are big, some are small, but all of them are furry, loveable and ready to do wondrous, magical things... like fly over mountains and make giant trees that grow in the middle of the night! Best of all, totoros can't be seen by adults, only the children who love them.

With its imaginative characters, heartwarming story and striking animation by the award-winning Hayao Miyazaki, My Neighbour Totoro is "certain to delight" again and again.

My neighbour Totoro is a truly wonderful film, the artwork and animation are of excellent quality as is just about everything else about this film.

The story.
A man and his two daughters 11-year-old Satsuki and 4-year-old Mei move out to an old house in the country so they can be near his wife who is sick in hospital. Shortly after moving in the Mei sees a small translucent creature carrying an acorn she follows it and after a short chase falls down a hole in the side of a giant camphor tree, emerging into a large forested cavern where she meets a giant version of the little creature, these are the Totoro.
Soon the Satsuki meets the Totoro and they all have a little adventure.
One day they receive a call from the hospital for their father who is away in the city for the day and fearing the worst Mei decides that she will go on her own to see her mother, unfortunately she gets lost and despite a large search conducted by most of the village no one seems to be able to find her, until that is Satsuki remembers her friend in the camphor tree.

I know it doesn¿t sound that great but it really is, even though the most dramatic thing that happens is a little girl getting lost, but the characters, the story, the direction and the imagination that went into this film keeps you watching right to the end and you'll come away from it feeling good with a smile on your face, well most people will anyway.

Anyway don t take my word for it watch it your self and see.

Oh, this is so cute! I adore Totoro..! :P
Totoro is that kind of movie, what I want to show to children and parents, and to my friends who doesn't like so mch about anime.
I would give more stars, if it's possible. Yay!

I really love this movie. It has touching and great story, avesome musics and great characters. This really is the best from Ghibli. 5 stars easily.