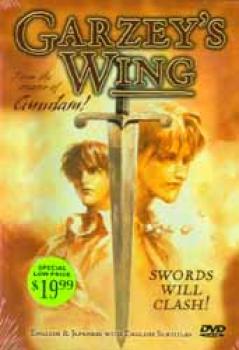 Yesterday, the biggest problem Chris had was getting into a good college. Now, his spirit has been hijacked by wings of light and transported into another world! Summoned by an enslaved tribe to lead a bloody revolution, Chris must quickly adapt to his new surroundings...or die.

At first I thought I bought an anime-movie, but in reality this is a three parter-series. All three parts are on this dvd.

The story is great, but has a &quot;weird&quot; ending. I expected something more of the ending. Still it isn't a bad anime (isn't the best either).
The animation looks a bit dated, but that is of no concern to me. I don't really mind if it's &quot;new-school&quot; or &quot;old-school&quot;. To me it's all about the story.

I bought the older version of this dvd, so I don't know much about the extra's on this dvd.
Don't let get all exited with what the cover says tho: from the creator of Gundam. If you expect something like that, you'll be very dissapointed.

Still a good anime at a good price.