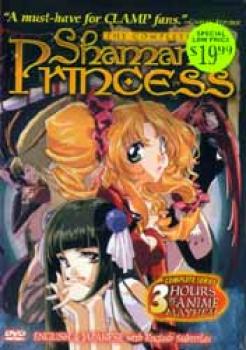 To retrieve the talisman stolen by her beloved, Tiara hunts the night, battling monsters with her awesome shamanic powers. Disguised as an ordinary schoolgirl by day, she arrives at his lair only to find her archrival already on the scene...protecting the thief! Dark secrets unravel as Tiara faces these powerful opponents, and her one hope for survival may be to betray her mission. 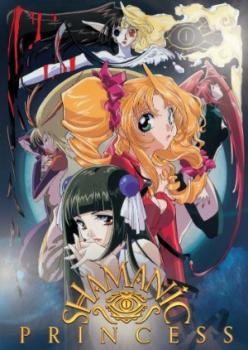 "Would make a fine addition to anyone's collection." by V. Krätke (Netherlands) on Dec 8, 2003

A full OAV series of six episodes on one disc should make anyone's bargain hunting muscles twitch, but even at a higher price, Shamanic Princess would be worth it. Far from an obscure bargain, this is actually a very solid series that deserves some wider recognition.

In a nutshell, Shamanic Princess is a somewhat more mature and philosophical magical girls story. Sort of what would happen if Miyazaki's little witch Kiki were to suddenly grow up and bound through the moonlit nights of her rustic little town in a snazzy red leather outfit.
The basic set-up of Tiara's quest to retrieve a magical gizmo that is essential to her homeworld is in fact of secondary importance to character interaction. Quite some time is spent on establishing the ties that bind the group of main characters, as well as the tensions between them, making for a mostly character-driven series. The catch, however, is that the narration is often non-linear and rather obtuse. Instead of spelling everything out to the viewer, one is left to imagine for himself how the characters feel during more contemplative moments. As such, it's never exactly clear what makes the characters tick, and things can seem confusing at times, especially when a haughty kind of supreme being with a penchant for spouting philosophy about what's real and what's not reveals itself as the main antagonist.

While the somewhat irregular storytelling and few artsy moments may confuse and irritate some viewers, I found that it actually adds to the story, making it more interesting to follow and warranting more repeat viewings than a plainly-told linear story would have. Also note that the story arc concerning the Throne of Yord ends in the fourth episode, after which episodes five and six take place in the past, showing us parts of Tiara's childhood and the events leading up to the first four episodes.
For those who find themselves bored with trying to follow the finer points of the plot, there are always the gorgeous visuals and spectacular magical duels to hold their attention.

If anything, this is a feast for the eyes with the lovely, delicate character designs, the soft and atmospheric background paintings (who shine with a beatifully subtle, quasi-impressionist look to them) and the dazzling portrayal of magic and summonings. Far from just energy bolt-flinging matches, the frequent magical duels almost resemble dance acts where the characters manipulate strands of smoke and vegetation with grace, cover their bodies with intricate scriptures and undergo amazing transformations. It's a captivating sight and a very creative handling of the done-to-death concept of magic and power plays. It all works wonders to immerse the viewer in a dreamlike and gently mysterious mood.

When all's said and done, with the rich, graceful visuals and the slighty confusing, but overall interesting story that Shamanic Princess has on offer, there's very little reason to hesitate about this disc. The sweet deal of three hours worth of footage on one fairly cheap disc is elevated to almost irresistible status with this.