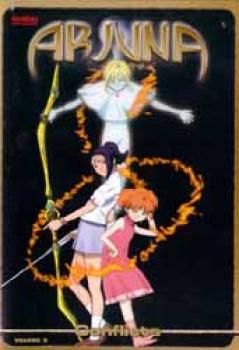 Other items in Arjuna TV DVD US

Now... a miracle is about to occur on this planet.

With Chris out of danger for the moment, things settle down a little. But the relationship between Tokio and Juna remains strained. As they struggle to understand each other, it becomes clear that they are growing further apart instead of closer together.

Cindy shows up unexpectedly and offers some unusually helpful and friendly advice, and also teaches Juna that if she listens closely, she will be able to hear some amazing things. And with this new ability, Juna discovers something about her sister, Kaine!

Bigger problems arise , however, at the research facility where Tokio's father works. She and Tokio work together to try and convince Mr. Oshima that there is an immediate danger to the facility, but a lifetime of stubborness is not easily changed. Then Juna suddenly finds herself in New York on a mission for S.E.E.D.. but she's picked a really bad time to be away from home... Contains four episodes with extended footage!