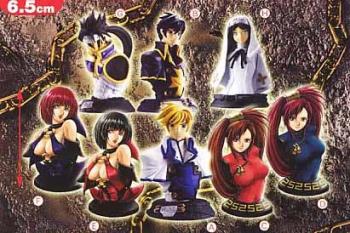 The second bust collection of Guilty gear X features 6 new characters of which 2 are available in 2 different color schemes bringing the total to 8 different busts. Each bust is made from PVC and measures 7 cm heigh. 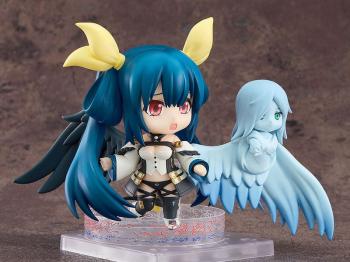 Ky Kiske from the Guilty Gear games is a really fascinating and charismatic character. I would've loved to own a finely detailed, high-quality figure of him to display. Unfortunately, this bust figure is not what I was hoping for.

The actual figure looks nowhere near as good as what the sample photo may lead you to expect. A very poor paint job is largely to blame for this. The figure's sculpt is actually quite decent, with some nicely detailed work on the folds in Ky's costume (particularly his characteristic shoulder-pads). But the crude paint job really marrs the effect. The figure ends up looking merely like a cheap plastic toy because of its simple, loud and gaudy color scheme. There are none of the subtle shading effects or rich, tasteful colors that make some other anime bust figures look so refined, and the few nice details that the figure gets right are overshadowed by the thick layer of chintzy primary colors that've been splashed over them. It's a crying shame to see the figure go to waste because of this, since it might've been a fairly nice figure if it had been painted with some more care and style.

I'm particularly disappointed by the hair and face of this figure. Ky's lush blonde manes are merely painted with a single shade of hideously bright yellow, and his face takes on a silly, forced expression with its inexplicable black (!) eyebrows and phoney-looking eyes. This figure is a very poor rendition of the dashing French swordsman, and in fact just a poor figure, period. It's just a tacky piece of plastic that tries, and miserably fails to pass itself off as a more luxurious collection piece.