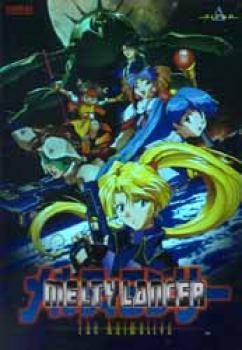 They're the best hope we've got. You'd better pray.

From Gonzo (Blue Submarine No. 6, hellsing) comes a fast, furious race to save the galaxy. meet Meltylancer, a super team of top cops in the Galaxy Police Organization (GPO). These six super females fight for truth and justice (and bicker a lot).

After having been disbanded, the team is now recalled to active duty. Their hapless new Aide has the hazardous job of rounding up the team and helping them to function in their new environment. Unfortunately, their new headquarters is less than state-of-the art, and their assignements are less than glamorous. And the girls are starting to get on each other's nerves to boot.

Meanwhile, a new mystery emerges: a terrorist organization is stealing DNA of endangered species across the galaxy. This puts members of the Meltylancer team at risk as well, as several of them are "unique specimens". Contains episodes 1-3.