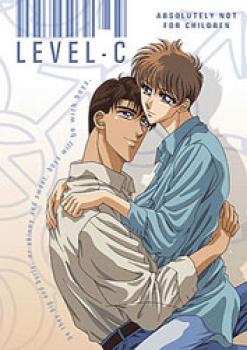 Mizuki is a popular male fashion model with a promising future. When the mysterious Haruno sees him, she wants to make him the centerpiece for her company's latest promotion. To lure Mizuki in, she calls on the talents of her twin brother, Kazo. He is quick to seduce the young supermodel, but things soon escalate beyond business-as-usual. As Kazo's feelings run away with him, it looks like true love for him and Mizuki.

The sheer novelty of an explicit yaoi title getting a commercial DVD release should be enough to make Level C at least worth a look for yaoi enthusiasts. And since there really isn't anything wrong with this disc, it should please its target audience just fine.

Take note that despite the abundant nudity and sex scenes, no male genitalia are ever shown full-on. When they are on-screen, they're either obscured, or suggested through mere silhouettes. It's a staple of yaoi products to just suggest the male appendage (glowing cones between the legs and invisible woodies are quite frequent in yaoi manga). If you want to see men's naughty bits, you're better off with the latest from Falcon.
Yaoi fans, however, will most likely know exactly what to expect from Level C and won't walk away disappointed.