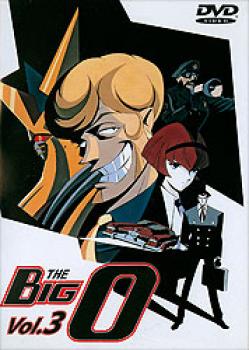 The Big O isn't quite the eye-catcher it was when it first came out anymore. The sparse, extremely un-Japanese art style and the rich film noir atmosphere seemed really fresh a few years ago, but by now trying to look un-Japanese has practically become the new hip thing for anime series to do. Then again, maybe the episodic nature of The Big O is starting to work against the show after a while. By this point in the series, viewers will have gotten used to the series' unusual visual style and its interesting setting, and it'll take somethig bigger than more of the same for the show to remain satisfying. Sadly, that doesn't quite happen in this third volume. Yes, there are intriguing plots, stylish imagery and a good handful of action (although the big robot battles are starting to get kind of silly), but it basically is more of the same as in previous episodes. I get the feeling that The Big O isn't really going anywhere, at least not until the second series. At the end of this volume, the series has been through three more episodic tales with no sign of moving towards any kind of all-encompassing conclusion, and there are only three more episodes to go. I did enjoy the individual stories, taken at face value. If you liked The Big O so far, volume three isn't a bad way to spend a few hours, especially now that it comes fairly cheap. But the series as a whole, which felt so fresh at first, is starting to look a little hollow as it goes on.