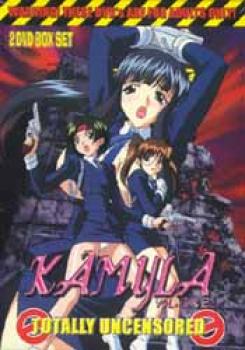 The evil drug is spreading through my body and destroying my soul.<UL><LI>Volume 1:
Late 20th century, during a time of rampant social corruption, a criminal market in human sex slavery has become increasingly common.The Japanese government created a specially trained task force to combat these crimes. Special agents Agatha, Lily, and Koyomi are dispatched to a warehouse to apprehend a criminal with a female hostage. However, Agatha ends up being taken hostage by the criminal, Lead Suits. Tied up in a small apartment, Agatha witnesses the efect of the mind-control drug Kamyla, used to turn humans into mindless slaves. She watches helplessly as her drugged hostage orally copulates her captor, and masturbates with a loaded gun at his command. After commanding his hostage to kill herself at the first sign of resistance by Agatha, Lead starts to molest Agatha against her will. Later, Lead returns with a vial in his hand, to inject Agatha with the evil drug, kamyla...<LI>Volume 2:
Special Agents Lily, Agatha and Koyomi are hot on the trail of a criminal ringleader of the human slavery trade, Lead Suits. During an armed confrontation with criminals, Agatha finds herself under the lascivious spell of the mind control drug, Kamyla. The lusty side effects of the drug seem to increase daily... Unable to control herself, Agatha starts to masturbate at the crime scene...Agatha soon finds that one of the men she has arrested, Denzel Call, is a high ranking member in Lead's organization. Agatha positions herself to storm the building, while Koyomi positions herself to secure the area. However, Koyomi is captured by Lead's bodyguards, and Agatha falls right into Lead's trap A shocking future awaits both Koyomi and Agatha...</UL>