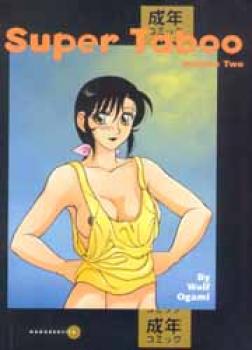 Collecting issues 8-12 of the infamous, smash-hit series, Super Taboo book 2 concludes the amazing, amorous adventures of the incestuous Sakagami family plus the two bonus adventures from the Super Taboo special (12). Watch as the action heats up between Yuu, his sister Eri and their irrepressibly libidinous mother, Misako. As the action heats up and becomes racier and raunchier, Yuu begins to feel he&#39;s in over his head¿and is soon deeply involved in a battle between his cool, collected reason and unbridled instinct. Which of these overwhelming forces will win out in the end? Watch the drama unfold and the dirty deeds get done in the epic battle of the sin-tury! And in the first of the two bonus tales of the Super Taboo Special, see just what sort of a welcome a long-lost sister receives when she returns home in &quotRiddle Me, Diddle Me&quot¿and if that&#39;s not enough, watch the sparks fly between Yuka and her she-male sibling Miki in &quotAnd now We&#39;re¿ sisters?!&quot Check out the amazing deeds of some families that add a spicy dose of vice to traditional family values in this definitive title by Wolf Ogami!