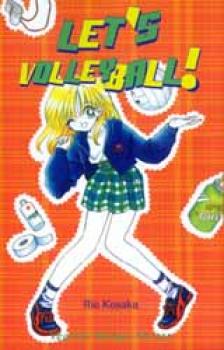 It's a sports manga! But it's shoujo! So that means this time it's a girl (Namiho Sakurai) who has the talent but doesn't take the game seriously, until events intervene and she finds the whole team is depending on her. And to be sure, there'll be lots of training, and &quot;secret&quot; techniques learned, and so on.

So how is it any different being shoujo? Well, it's a lot cuter than Slam Dunk, and there's boy trouble galore. Yes, I'm being rather flippant, but all in all it's not badly done. If you're at all interested in the concept, you'll probably like the manga. By the way, the interior artwork doesn't look as juvenile as cover; it really is high school level.

The Let's Volleyball story itself is fairly short, in three parts, taking up only about half the volume. The rest of the volume is taken up with two other stories. The first is another volleyball story (with different teams) - this time, it's girls vs. boys, as arrogant boys' team captain Tabata challenges girls' captain Atsuko Tomita and her squad to a match - three against six! Atsuko strives to whip her team into shape in time, but the other girls seem more interested in deciding which boys' team member is cuter than in trying to beat them. Oddly enough, though, the boys' team subcaptain Eno shows up to help out. Just what (or, rather, who) is his real interest?

The last story is more or less pure sports-free shoujo, unless you count Rumi's thrashings of Kominami as a sport. However, it's also the most amusing of the lot. Middle school student Rumi Arima is flunking out in math, a situation hardly improved by her classmate Kominami's relentless needling. So Rumi's mother hires university student Taniguchi as her private tutor. Taniguchi just happens to be a dreamboat, kind, mature, gentle, all the things Rumi ever thought she'd want in a man, and the exact opposite of Kominami. But somehow that annoying Kominami contrives to show up during all her tutoring sessions, saying he's there to protect Rumi's virginity from the older man. No guesses on how things end up!

The V&eacute;g&eacute;tal edition is as usual unflipped, with the katakana sound effects preserved. It seems a bit better finished than the other ones of theirs I've seen. In particular, they called in professional help (a French volleyball team coach) to ensure all the volleyball terminology was correct.