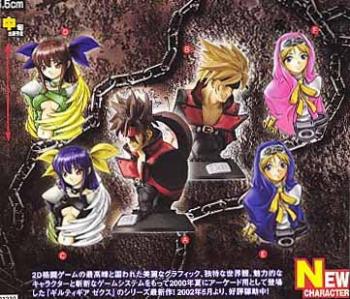 This bust is pretty much the same as the regular, blue version of the Bridget bust. It's one of the better entries in the very hit-and-miss line of Guilty Gear busts. Not a spectacular collectible by any standards, but fairly decent all the same. The figure is fairly simple-looking, but it's a good likeness of the Bridget character with a few nice details here and there. The face, especially, came out very well compared to most of the other bust figures. Like the other figures, the paint job is very unrefined. And like the blue Bridget figure, the pink Bridget doesn't suffer too much from the poor paint job. The garish yellow hair is a bit of an eyesore, but the simple colours don't look too bad for this character. There's just one thing this figure has in common with all other Guilty Gear busts and that really bothers me about it: that awful,rubbery stench it gives off. Put an aerosol next to it if you want to display it anywhere in your home.