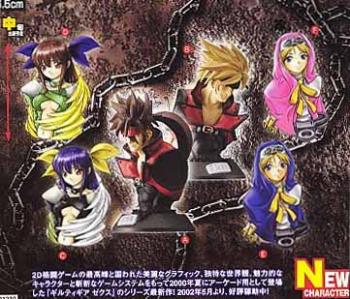 this figure is ok. And I thing that Soul is the best one.

Out of all the figures I've seen from the Guilty Gear bust collection so far, the Sol figure is probably the best one. That isn't saying a whole lot, though, as I find these busts pretty disappointing on the whole. They look rather cheap and tacky, with coarse paint jobs and not a whole lot of detail to them.

These bust figures come in individual plastic bags sealed by a header card (it looks as if they were crane game prizes of some kind, so they're probably quite rare by now). When you remove one of these figures from its plastic bag, the first thing you'll notice is an overwhelmingly strong smell of rubber that leaps out at and smacks you in the nostrils. The smell thankfully fades away after a few hours, but the figures retain the look and feel of a plasticky toy for much longer. The eyes look as if they've been stenciled on, giving the faces of a lot of figures an awfully fake look (the Dizzy figure has a downright awful facial expression), smaller details in the sculpt are roughly painted over, and the paint jobs in general are limited to simple, gaudy colors with no finer shading or airbrushing effects whatsoever. There have been much better sets of anime-based bust figures (think of Kaiyodo's little Trigun busts - now those are some beautifully fine collectables), and the charismatic Guilty Gear cast deserves better than these crude renditions.

The Sol Badguy figure doesn't bother me as much as the other busts. His spiky hair is nicely rendered, all the other details are in the right place ('Rock You' headpiece, Riot logo on the back of his vest) and don't look too tacky. He doesn't suffer from the limited paint job too much, since you really only need bold red and black to dominate a standard-outfit Sol. Definitely not the best figure you could imagine, but at least not an actively painful one. If you're a Guilty Gear enthusiast with low expectations and a bit of spare change, the Sol bust is a decent little gimmick. Just keep in mind that most other figures in the bust collection look pretty lazy before you set your heart on the rest of them.