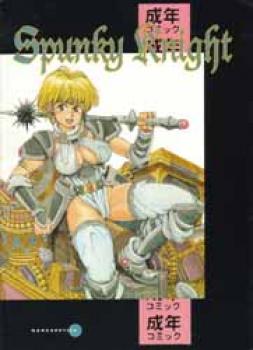 The people of the forest are beings menaced by a male demon with an insatiable sex drive, and ambitious bounty hunter Phaia feels she&#39;s more than a match for him and boy, is she right! After a hot and sweaty session in which the poor fellow is drained of every drop of bodily fluid, he retreats back into the nether regions from which he came but not before casting a spell on our comely heroine that will last the rest of her life: now she has a sex-drive ten times greater than even the horniest normal woman! That&#39;s just the beginning, and her subsequent adventures get more and more extreme as she takes on super-hung minotaurs, sex-craving tentacle monsters, double-dicked she-males, and more! Plus bonus pages that give you the ins and outs of this insatiable young vixen! And that&#39;s not all for your added pleasure, the Spunky knight novel includes the two issues of kozo Yohei&#39;s extreme lesbian sex-action series, Superfist Ayumi truly giving you more banging for the buck! Ayumi&#39;s the captain of her school&#39;s martial arts club but the rest of the students can&#39;t keep their hands (or other body parts!) off her &#39;cause she&#39;s a mistress off the marital arts as well!