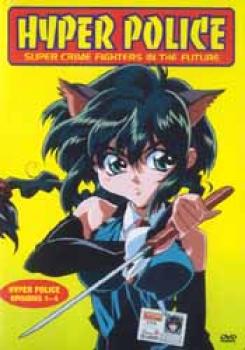 Other items in Hyper police TV DVD US

<UL><LI>Episode 1 "Bounty hunter"
Natsuki Sasahara, a bounty hunter, is half human and half Nekomata (cat monster). In order to protect the laws and order of human beings and monsters, she fights against evil criminals as an employee of Police Company. One day she is fighting a criminal with her senior partner, Batanen Fujioka, but injures Fujioka by accident.<LI>Episode 2 "Nine-tail fox? Sakura appears"
Sakura is a Nine-tail fox who hesn't earned nine tails yet. She must gain strong magical power in order to become a true Nine-tail fox. Sakura has her eyes on natsuki whose magic is very powerful. At the time, Natsuki is on a job that will pay her a bonus if she successfully arrests a brutal criminal on the wanted list.<LI>Episode 3 "Combination anxiety?"
Natsuki has a new partner; instead of Batanen he is replaced by Sakura. Since all Sakura does is try to steal Natsuki's magical power, rumors spread in the company and Natsuki starts wondering is she can trust Sakura as well. Consequently, their teamwork is ruined.<LI>Episode 4 "A meal and a night's lodging"
Sakura is ridiculed by Fonne of Mad Police Corporation, a rival company. Upset, Sakura tries to outsmart her by capturing the wanted Bomb Monsters. She finally arrests one of them, but meanwhile, Fonne manages to arrest the leader of the gang. Natsuki, worried about sakura being totally exhausted, finds her on the street living like a homeless person.</UL>