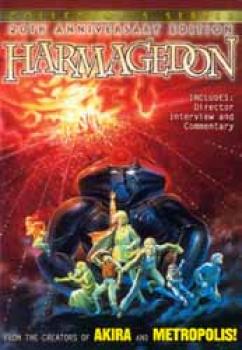 From the depths of space he is coming! Ancient beyond understanding, his power is immeasurable. He has destroyed half the universe and is on his way here. He is Genma! Determined to spare the Earth from a similar fate, Princess Luna, a modern day prophetess, and Vega, a cybernetic crusader from a world long since ravaged by Genma, must try to mobilize the most potent psychics in the world. Together, this army of fledging psychic warriors must succeed where billions have tried - and failed! Harmagedon features character designs by Katsuhiro Otomo (AKIRA). Approximate running time: 132 minutes.

Harmagedon is one of the earliest collaborations between revolutionary anime creators Rintaro and Katsuhiro Otomo.

Rintaro has directed many of the most influential anime films and characters, including Astroboy, Kimba the white Lion and X: the movie.

Otomo is best known as the director and author of Akira and screenwriter of Roujin-Z. In recent years, Otomo has supervised the production of Perfect Blue and Spriggan.

The most recent collaboration between Rintaro and Otomo was the critically acclaimed Metropolis, and Harmagedon is the film that many consider to be the building block for the epic accomplishments of these pioneering visionaries.