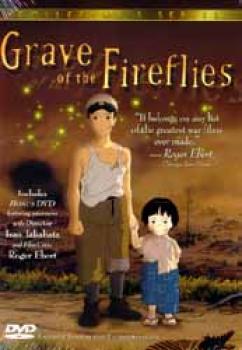 In the aftermath of a World War II bombing, two orphaned children struggle to survive in the Japanese countryside. To Seita and his four-year-old sister, the helplessness and indifference of their countrymen is even more painful than the enemy raids. Through desperation, hunger and grief, these childrens lives are as heartbreakingly fragile as their spirit and love is inspiring. Written & directed by Isao Takahata (Nausicaa, Laputa), Grave of the Fireflies is a tale of the true tragedy of war and innocence lost, not only of the abandoned young, but of an entire nation. Approximate running time: 88 minutes.

"There are only a few sights, if any, as saddening as that of a young child suffering." by Villain (Finland) on Apr 7, 2006

Grave of the Fireflies is an extremely sorrowful, yet incredibly beautiful movie about a brother and a sister trying to survive in Japan at the end of the Second World War. It is a very unusual movie in many ways. There's no story, at least not in a traditional sense, just a few extremely detailed moments of the life of these two children. Also, already in the first few scenes it is revealed that there will be a very sad ending, and the rest of the movie is just a painful journey towards that inevitable moment of sadness. Still, that journey is well worth to be seen.

While the animation is technically outdated, the art is unparalleled in its simple beauty even today. Together with the carefully used background-music the artwork supports the somber mood very well. The end result is a deeply touching movie, almost to the point of being emotionally exhausting.

There are essentially only two characters - the others are merely statists - but the two are brilliant. Seita, the brother, looks like any typical strong-willed anime lead at first, but soon it gets obvious he is far from perfect; and those many flaws of his make him a believable character, a real person. Eventually, his only redeeming quality is his unconditional love for his little sister - and even then he fails to make the right choices for her.

Setsuko, the little sister, is the most realistic little girl I have ever seen in anime. She is easily distracted, quick to change her mood, often complaining and always genuinely innocent. Her movements, manners, crying and way of thinking are exactly like those of a little girl. She's also perfectly voiced (in the Japanese dub) by a child-actress, as no adult could have the intonation of hers.

Overall, Grave of the Fireflies deserves its renowned status as an anime classic, despite its lack of a traditional storyline.

Take note, kids. This is not your average happy anime klaptrap with its annoying sweatdrops and speed stripes. The Naruto crowd will have to look elsewhere for their fix. What we have here is a very good, albeit very sad film about two children struggling to survive in wartime. It's the sort of film anime buffs like to present as evidence that anime is sometimes more than just sweatdrops and speed stripes. People keep calling it a cinematic masterpiece, a heart-rending opus and whatnot. But for a movie with such a reputation, I was struck by just how much restraint Grave of the Fireflies displays. Takahata pulls no punches when showing the horrors of war, yet doesn't spill over into all-out grotesqueries. The sad segments are never exaggerated to the point of melodrama. The few happy moments never turn saccharine. No pretentious pontification about some deep message. The movie tells its tale with economy and grace, which is very effective.

Grave of the Fireflies displays this same kind of understated beauty in its visuals. Everything is rendered with painstaking detail. The stark and very un-cartoony characters are laboriously animated and look very natural. There are no big money effects or outlandish designs, but what's there is plenty effective without added bells and whistles.

Summarizing the plot would be pointless. It's war and awful things happen to innocent civilians. You know that much already when going into the movie. You watch this to see how well Takahata and his team pull it off, and they deliver.

'Grave of the Fireflies' is not just a movie about war. It's about survival, and maintaining one's pride, even in situations where such an emotion can have a potentially quite fatal outcome...
Some argue that this film cannot choose between being an anti-war movie and a movie about a brother-sister relationship. I'd like to point out that the reason for this is that the film is based on a book which was partly autobiographical. The film isn't explicitely anti-war theme-wise, but through the (quite intrically detailed) portayal of the brother-sister relationship, the viewer can draw his/her own conclusions.
Truely, this film can hold its own next to other warfilms like 'Apocalypse Now', because, like that film, it deals with the way people act and behave in extreme situations, albeit in a totally different way, without forcing the viewer to 'feel' any melodramatic emotions, like Spielberg likes to do all too often.