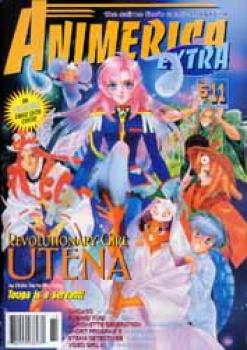 Animerica Extra anniversary issue! The greatest shoujo and shounen manga! A brand-new original cover by Chiho Saito! Read an in-depth look at the classic ghostly manga, Hakuba no Kitaro! In Short Program 2, a mysterious man enters the 5X4P. In Fushigi Yûgi Tamahome runs into his prior captress Yui in the frozen north! In Video Girl Ai it's Mai vs. Ai in combat! Can the cross save Ai? In Steam Detectives will an opera star become Le Bread's sacrifice to the devil? Then, in Chicago it's the climax to the kidnapping in the snow! Also, in Revolutionary Girl Utena, Utena has the world's worst servant, and Wakaba is trapped in a fire! Lastly, in Marionette Generation Kinoko is determined to stay in Izumi's apartment forever!