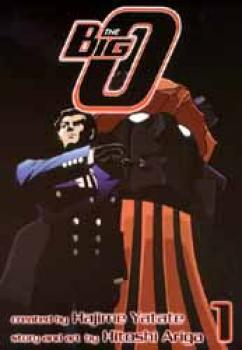 Other items in Big O manga US 1st ed

The Big O
Paradigm City is the city of amnesia - 40 years ago, something happened that wiped out the memories of the residents, forcing them to recreate their culture from scattered fragments. In this world only m40 years old, Roger Smith is a "negotiator" - a go-between for police, citizens and criminals in high-risk diplomatic situations. But something else survives from the forgotten past. They are the MegaDeus, giant robots of apocalyptic power. When crime and madness strike, Roger Smith brings the guilty to justice with the MegaDeus called The Big O.

A city called Amnesia
A master criminal uses a desperate couple as pawns to hold the city's memory bank hostage! In an attempt to defeat the Big O, beck commissions a mad scientist to beat the giant robot using some of the smallest creatures on Earth. Then, when Roger Smith is hired to deliver the ransom for an industrialist's kidnapped daughter, he finds that the girl's paternity...and humanity..may be in doubt. More than a straight adaption of the hit Cartoon Network series, the manga includes the prequel to events in the Big O anime, plus many completely new stories!