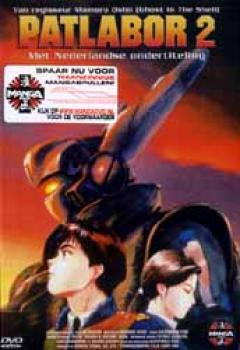 I just don't get Manga Video. They have some of the most sophisticated, intellectual pieces of animation out there in their catalog, yet they constantly market such titles as kewl shit with guns 'n blood 'n stuff for dumb teenage audiences. Patlabor 2 has suffered a similiar fate. It's an extremely slow, talky and contemplative film. But if you pick at the right bits, you can string together a two-minute trailer with a good amount of explosions and millitary hardware to market the film as a gung-ho action film. And thus, Patlabor 2 gets a rushed, flimsy Dutch DVD release with annoyingly inaccurate dubtitles and pretty much zero extras.

Which, of course, is all wrong for Patlabor 2. The story takes place in a fictive 2002 Tokyo. The film was first released in the early nineties, but got its portrayal of 2002 frighteningly right. Basically, the film chronicles a series of terrorist attacks, both real and staged, launched upon Tokyo by one man because of his beliefs that Japan's comparative state of peace is just that - comparative, and apt to crumble at a moment's notice. The attacks, while fairly small in scope, set some power-play between the Japanese goverment, the millitary and the Americans (always with the Americans!) in motion, which might eventually threaten the integrity of the entire Japanese nation. Captains Gotoh and Nagumo of the Special Vehicle divisions, who had been following the unfolding events, finally step in for a last-ditch attempt to stop the man behind these attacks.

All of this is played out extremely slowly. Patlabor 2 takes its time to explore underlying issues and build up atmosphere. We're shown how ordinary daily life of Tokyo's citizens gradually fades away while the state of emergency intensifies. We get several long talks questioning just how deservedly a civilised nation can enjoy a cosy state of peace while wars tear up countries throughout the globe. These are weigthy issues, and they ring more true than ever in the paranoid, uncomfortable era of the early 2000's. It's rare for science fiction to get its visions of the future so spot on.

The gorgeous visuals and the beautiful, slightly eerie music add that much more power to Patlabor 2's messages. Starkly lit white spaces and pale grey tones dominate the film. Even the characters, who suddenly look a lot less happy and cartoony than they did in previous Patlabor outings, walk around with a deathly pallor to their faces. Patlabor 2 has a kind of grimly poetic style that will stick in viewers minds for a long time.

I did get annoyed by the over-reliance on expository dialogue to move the story onward, at times. We're frequently told of important developments (some minister has been fired, troops have started moving, etcetera) without ever seeing them happen. It makes following the story that much harder, especially if you have to rely on this Dutch DVD's rubbish dubtitles. Also note that it's not recommended to watch this film without some prior knowledge of the Patlabor universe. Apart from Gotoh and Nagumo, the regular SV2 gang doesn't show up a whole lot in this film. If one has some knowledge of these character, little moments like Noah visiting the now-abandoned Alphonse, or Hiromi releasing his chickens are charming to watch. If not, the film will seem infinitely mistifying. For a basic outline of the Patlabor universe and the protagonists, watching the first movie at the very least is recommended (especially since Patlabor 2 explicitly refers to events from the first film).

If you have sufficient background knowledge, Patlabor 2 is worth seeing. It's a two-hour film with only one genuine action scene in it (and that's a short one, too), it's relentlessly talky, and at times feels so obtuse that it might as well be arthouse cinema. However, it is also so strikingly beautiful, atmospheric and laden with important messages that it will make a strong impression on any viewer who can appreciate it. I just wish Manga Video could've done a better job than the sloppy DVD we're presented with. Surely, they'll have to learn sooner or later?

The first movie was quite enjoyable eventhough it had nothing special to offer. Nonetheless it was 10 times more enjoyable than this one for sure....

The story is soooooo slow OMG...... The first one had this plot that was interesting to find out what caused the labors to go haywire but this political blabber.... I think only real fans of the TV series will see this. The animation is better, artwork more detailed than the first movie but the movie itself isn't interestign at all. It's not worth 0 stars because it's not a disaster but they should've picked something more interesting to put the labors in.

The extra's are skinny too. The same making off as on the first DVD... How cheap....

Image quality and sound quality are good though. Heh.... What else can I say about this release? Nothing more I think...