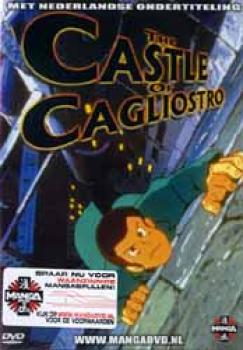 "Wonderful movie, shame about the dubtitles." by V. Krätke (Netherlands) on Nov 7, 2003

Domestically-released Miyazaki movies are a reason to rejoice, period. It's great to have such a lovely movie widely available on the home market on DVD. And Miyazaki is well up to his usual standards here, crafting a story full of fun and wonder.

There's just one catch; while the DVD features a Japanese language option, there are no proper subtitles to accompany the Japanese audio. What Manga Video has done here is to merely slap the Dutch translation of the English-language dub track onto the Japanese audio track. Maybe only fussy purists will notice about this, but since the subtitles translate a completely different script than the one being played on the Japanese audio track, this leads to some wild discrepancies between the subtitles and the actual audio. Now, I'm by no means fluent in Japanese, but it only takes a set of normally functioning human ears to notice that the characters never refer to Lupin as 'Wolf' in the Japanese version (just plain Ars&egrave;ne Lupin, unmistakeable even when pronounced with a Japanese accent), that Jigen never calls Lupin 'boss' and that the subtitles trail off completely in an early scene where Lupin describes Cagliostro as a 'black hole'. No mention of any black holes in the subtitles. There were plenty of other scenes where the subtitles seemed inaccurate, and it bothers me a lot to think that I might be missing out on much of the Japanese dialogue's proper meaning without an actual translation.

While the above shortcoming by no means destroys the movie entirely, it's a sign of downright laziness on Manga Video's behalf that insults the buyer's intelligence a great deal. Apart from this, though, the DVD is fairly nicely made, with pretty menus, and at the very least a choice between Japanese and English dubbed audio.

The dubtitles may be a very irritating flaw, but this is still a fine movie worth owning. If you can't find a better edition of the film anywhere, by all means, go for this easy option. You still get that trademark Miyazaki quality, and the titular castle is a magnificiently-crafted setting, full of atmosphere and surprises.

What I especially like about this film is how it fits in very well with the typical feeling of the original Ars&egrave;ne Lupin novels by Maurice Leblanc, despite being based on Monkey Punch's modernised Lupin the third. Baroque castles full of traps and treasures, ruthless villains, and a truck load of excitement and plain light-hearted, happy-go-lucky fun in face of all the dangers are trademark elements of the original Lupin stories that all come out in full force here.

It's a beautifully made film that should thrill anyone (I shudder to use the phrase 'your inner child', but that's exactly who will enjoy this film massively), providing they know that they can live with the shoddy dubtitles. Such a fine film really deserves to be treated better than this fairly lazy disc from Manga Video, but with all the sheer fun that this movie provides, I can recommend even a relatively poor edition such as this one.