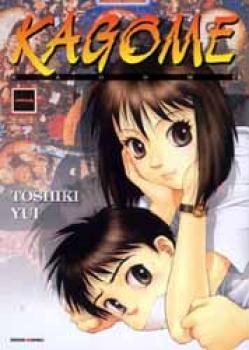 OK, I guess this blurb is doing its job in misrepresenting the contents of the book... Yes, Takeuchi has problems with the two Kagomes, but &quot;love triangle&quot; is a little off - it's more that they're both trying to use him for their own purposes. Kagome Nishino (the short-haired one) tries to uses him as the goad to bring out spirits that are haunting various apartments, for fun and profit. Kagome Kusaka (the long-haired one) would like to use him to get rid of her bothersome psychic powers (through means you can probably guess, cf. e.g. Devil Hunter Yohko); however, she ends up being too embarrassed to carry it out in front of the ghost of Takeuchi's mother, who starts following him around. Or rather, the ghost of Takeuchi's mother's head, since that's all that appears at first. But then other body parts start showing up....

I must say that Toshiki Yui is one of the more frustrating authors. I feel a bit like one of my old schoolteachers saying this, but he's someone who could be really good if he just tried a little harder, especially with his plots. His characters are always cute and have entertaining personalities; he has (with a few minor exceptions) pretty much mastered blending in digital art and shading into his panels; and he can set up potentially interesting story premises. But then he tends to get lazy, and the stories trail off into having the characters troupe around in front of his computer-generated backgrounds to no great purpose. Fortunately, in this case, Kagome ends fairly well, but much of the middle volume was kind of a waste. Still and all, it's an enjoyable, if minor-league, work.

The G&eacute;n&eacute;ration Comics edition is good enough (flipped as usual for them, but cleanly done), though does have a few mistakes (e.g., names mixed up in one or two places, which adds to the confusion of the two Kagomes).