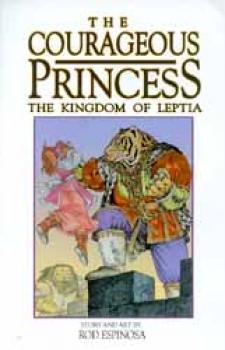 Ignatz and Eisner nominee Rod Espinosa's critically acclaimed series returns for its final chapter. Princess Mabelrose is not like any other fairytale princess. She isn't the fairest in the land and she bungled her first ball and the prince would not dance with her. Kidnapped by the evil dragon and not wanting to wait for a prince to rescue her, she did what no other fairy tale princess has ever done: she boldly escaped on her own! With the aid of Spiky, a friendly talking porcupine, they found temporary solace with the Munken people. But safety was only temporary; they had to move on to prevent the evil dragon from catching up and locating them. The Munkens advised them to seek the kingdom of Leptia. Only, once they arrive, will Mabelrose and Spiky be safe? What are the dragon's plans? What secrets lay undiscovered in the kingdom that lies before them?