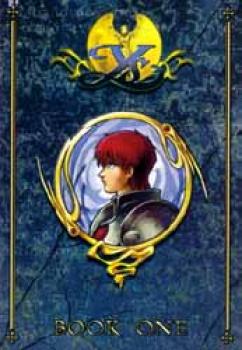 Based on the epic video game series, Ys redefines high fantasy in anime. Esteria is an Island country that once flourished with great riches and promise, but the hands of evil have taken hold. Monsters now cover the country and torment its people. An unsuspecting adventurer by the name of Adol Christen has been drawn into the great conflict that has beset the island. He sets off on a quest to save this desperate and plagued land... a land once known as the great utopia of Ys.

"Surprisingly watchable despite it's obscure game origins and rather dated art." by V. Krätke (Netherlands) on Nov 6, 2003

Videogame-based anime has a reputation of being pretty mediocre most of the time, but judging from this first DVD, the Ys OAV's are a fairly decent fanatsy romp that shouldn't be written off purely on account of it's videogame roots or it's somewhat ugly art.

For that's probably the main stumbling block that these OAV's face; it all looks rather dated, with somewhat crude character designs that scream '1980's flashback!' On the other hand, everything does move fairly smoothly.

One thing die-hard fans of the Ys games might feel bad about is how the OAV character designs are pretty different from what they may be used to. Now, I'm no authority on the Ys games, but I know them well enough to raise my eyebrows when Dark Fact shows up with curly lavender hair. The cast sure don't look as glossy as they do in the art and cut-scenes of the more recent Ys Eternal games (presumeably because there was no such art to work from back when these OAVs were made - but still, curly lavender-haired Dark Fact?)

Then again, I don't expect Adol and Dark Fact to exactly be household names in the occidental world, so most people won't even notice, let alone mind about their designs (and for those who -do- know the games, the faithful rendition of the plot and the use of genuine Ys music and monsters should be pleasing). And since the altered character designs don't really detract from the overall entertainment, it's pretty much forgiveable.

For the rest, there's a solid story in here that should appeal to more than just fantasy fans. It won't exactly set the world on fire, but it does a good job of drawing the viewer into it's plot and making him root for the characters - the plight of Esteria's people is well-portrayed, and Adol is a genuinely likeable no-nonsense pioneering spirit. With a good deal of action and adventure thrown in, Ys does a good job of telling an enjoyable fantasy story. Should be enjoyable for those who can look past it's slightly crude visuals.

To top things off, the DVD is a nice little package, with menus that look like the interface of an old videogame and a handful of decent extras (most are fairly pointless, but it's nice to see someone cared enough to include them - don't miss the 'outtakes' that twist a few dubbed scenes around hilariously).