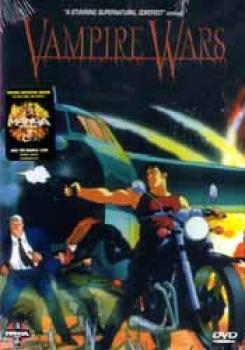 A chilling tale of modern day vampires, set loose on a city, free to kill at will.

First, a brutal terrorist attack on a NASA base takes place deep in the Arizona desert. Then, ten days later, the corpse of a CIA man is found floating in the Seine in Paris. Are the two events connected?

Monsieur Lassar of the French Secret Service thinks there is a connection, but he can't figure it out. He hires international terrorist spy and master criminal Kousaburo Kuki to help. Kuki discovers that film super-star Lamia Vindaw is the key to the mystery. She has become the focus of a CIA operation in Paris and, more sinisterly, the target of a bizarre vampire cult.

Can Kuki get to the bottom of the mystery and save the glamorous Miss Vindaw... or will he too become just another number in th bloody body count?

Based on the best-selling novel by Kiyoshi Kasia, anime director Kazuhisa Takenouchi creates a dark tale of mystery, intrigue and heart pounding action in this high-octane anime thriller!