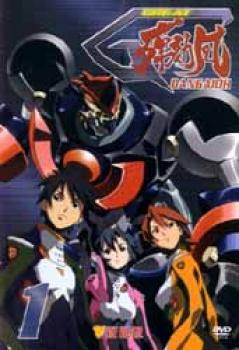 After a decade of silence, the Dangaioh Legend Continues

A mysterious explosion on Futagami Island begins a new chapter in the Dangaioh mythos! Winessed as a bright light up in the sky by only one, young girl, the arrival of a mysterious someone in the sky may or may not be a signal dor the end of the human race.

Flash-forward to ten years later. Led by the evil Professor Katou, a band of warriors calling themselves the "Tartarus Knights" have, thanks to the help of four mighty generals, begun their campaign to lay waste to the world. Their final objective? A small research station on Futagami Island. Katou's victory seems almost certain, until he encounters guarding the Island an advanced fortress. From it, a group of three humanoid robots are launched - Dangaioh!

A new, thirteen-episode series from the creative mind of Toshiki Hirano (Creator of the 1989's Dangaioh OAV series). Great Dangaioh is the culmination of years of questions and excitement from viewers both in Japan and in North America. A series that many fans have long felt needed to be made, at last the legend of Great Dangaioh lives on, after a decade of silence...<UL><LI>Episode 1 - Prelude to battle<LI>Episode 2 - Hold the fort<LI>Episode 3 - Attack of the sand demons<LI>Episode 4 - Peace fort in a cage</UL>