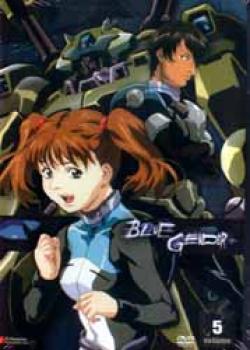 Welcome to the year 2031. Bugs known as "Blue" have inherited the earth, casting humanity to the brink of extinction. Faced with this unstoppable threat, the last vestiges of humanity have abandoned earth and pioneered to the stars, where they train for their inevitable return to earth. To these hardened warriors, Yuji, a 'sleeper', is nothing more than a sample of life before the Blue, mere cargo. And Yuji realizes that if he wants to survive and reclaim some part of the world he once knew, he has to fight for it!

Y - Yuji What have they done to you?
You're telling me I can save the Earth with my power? Fine. Then you can use my body however you want. But, Arlene is the only partner I'll work with. No one else!