≫ Series not available ≫ Weapon of the Gods GN 1

Weapon of the Gods GN 1 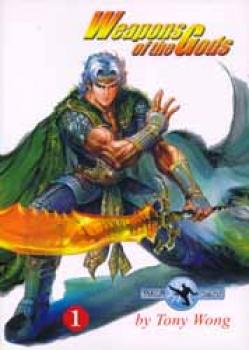 Weapon of the Gods GN 1

Further expanding its full-color Kung Fu comics line, ComicsOne is bringing Weapons of the Gods to American audiences. From Tony Wong, the acclaimed author of Oriental Heroes (from Jademan Comics), Weapons of the Gods tracks two ancient weapons of immeasurable power as they battle throughout the ages. The weapons were created long ago, when Celestial Goddess was locked in battle with the Dark Spirit. Celestial Goddess used five colors of stones to create a magical weapon known as "Heaven's Crystal" in order to defeat the evil Spirit. One hundred years later, Heaven's Crystal disappeared. Now, forces are trying to use "Tiger Soul," its opposing weapon, to destroy the world! Our hero, young Tian, must search for Heaven's Crystal because only its power can defeat the fearful might of Tiger Soul!