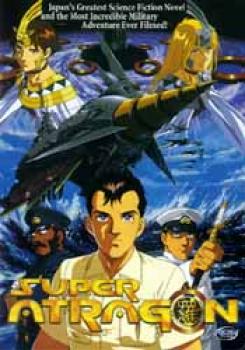 Our armed forces are helpless. The world's navies destroyed! Man's only hope is an untried weapon.

Get ready for a non-stop onslaught og high-tech action as metal leviathans collide in the ultimate war of super science in Super Atragon. moments after an atomic bomb falls over Hiroshima, a secret Japanese submarine sails into battle against its American counterpart, and both are lost to history. Some fifty years later, a special UN task force sent to investigate unusual phenomena in antarctica is threatened by a mysterious black cylinder until the re-appearance of the long-lost Japanese sub. However, the incident in the Antarctic is only the first round in a cataclysmic battle of wills between two descendants of an ancient race dwelling within the Earth. Standing against them is a single, amazing ship, the RA, a Yamato-class battle sub secretly built after its supposed destruction in World War II. A science fiction masterpiece with a brilliant story and stunning animation, Super Atragon is a classic no one should miss!