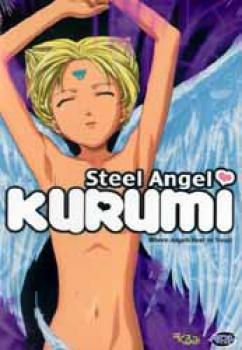 The academy has sent its deadliest assassin to destroy Steel Angel Kurumi. Using helpless Saki as bait, the ruthless Karinka sets a trap to finally rip out Kurumi's powerful Mark II Heart from her chest cavity.

But Kurumi's Heart hides a dark force within that Karinka didn't count on... a force that frightens everyone who witnesses its awesome power. Now the Academy is forced to take even more drastic measures. A mysterious stranger appears and tries to persuade Kurumi's master to use his mystical power to stop Kurumi before her dark energy overtakes her.

Rich animation. A sinuous sci-fi plot. Unforgettable characters. Sexy, funny, thrilling - Steel Angel Kurumi is an animated adventure like no other. From the heavenly beauty of the Steel Angels (and the actresses who give them voice) to the hot-as-hell action sequences, the third installment of Steel Angel Kurumi will take you places you've never been but always wanted to go. Are you ready?